By: Advancing Innovation in Dermatology 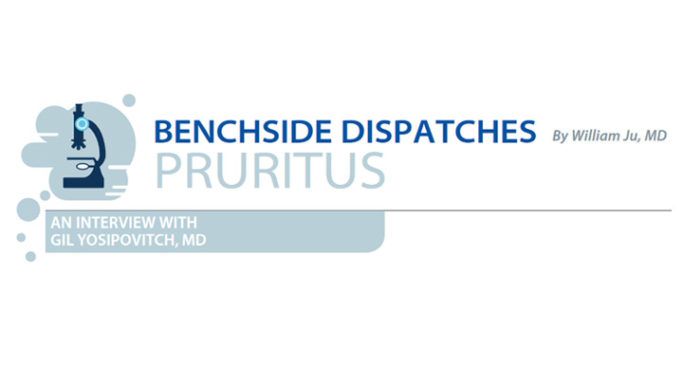 An interview with Gil Yosipovitch, MD

In the second installment of Benchside Dispatches, Gil Yosipovitch, MD discusses pruritus. Dr. Yosipovitch, a professor of dermatology and Director of the Itch Center at the Lewis Katz School of Medicine at Temple University, is one of the foremost researchers in the field of itch.

The classic thinking in dermatology is that pruritus is a symptom and feature of many of the skin conditions seen in the clinic on a routine basis. However, stemming largely from a growing body of scientific discoveries highlighting the complex and multifactorial nature of pruritus, there is an emerging paradigm that recognizes itch as a disease rather than a symptom. Such a shift would have far reaching implications for both the clinical management of itch, as well as for the research community.

According to Gil Yosipovitch, MD, the evolution of understanding of pruritus has a lot of parallels to the changing thinking in pain management. Like itch, pain used to be viewed as an adjunctive rather than a primary concern for treatment in the clinic (and for research). Moreover, a realization of the multiple pathways that may lead to pain led to research on novel targets and the development of more directed treatment strategies. Likewise, in pruritus, research has identified multiple potential etiologies that may be appropriate therapeutic targets, and, ultimately, may lead to more effective and comprehensive treatment strategies.

AID In the News